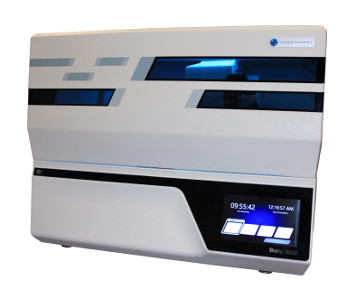 Synthetic Genomics, Inc.’s BioXp benchtop DNA “printer” was featured in Dan Gibson’s recent TED Talk on building synthetic DNA and sending it over the internet. Gibson is credited with developing the Gibson Assembly Method, a reaction that stitches together short pieces of DNA into complete genomes without error. The BioXp was developed by NOVO for Synthetic Genomics (SGI) in 2013.

The BioXp was instrumental in creating a vaccine for the H7N9 bird flu from China. After Chinese scientists isolated the virus, sequenced its DNA, and uploaded the sequence to the internet, Gibson and his teams in the US were able to download the sequence and print it on the BioXp in less than 12 hours. This synthetic DNA was then used by Novartis to create a vaccine for the flu. Using the BioXp helped reduce the time needed for vaccine development from months to days because the synthetic method eliminated the time required to grow the virus in a laboratory.

SGI has since created a “biological teleporter,” also known as a Digital-to-Biological Converter, or DBC, which has the ability to start with digitized DNA code rather than pre-manufactured pieces of DNA, as the BioXp uses.

Read more about NOVO’s development of the BioXp here.